The Krachtgever at the exhibition Vision in Motion-Motion in Vision, Verbeke Foundation, Kemzeke, Belgium, 2008.

The first work, entitled Krachtgever (“Invigorator”) was developed within the framework of the Festival TARt’93 in cooperation with students from the faculty of mechanical engineering of the University of Twente in Enschede, Holland. A second version was premiered in 1994 at PERRON 1, Delden and DEAF 94 at V_2, Rotterdam, consisting of seven 2.50 metres high stacks of four wooden boxes each, with a total width of 6 metres. The current version, twice as big, built with 56 boxes and a total width of 12 metres, it was presented for the first time at the OK in Linz, Austria, September 1998 to celebrate the Golden Nica, which was given to the project in the category “Computer Music” of the Prix Ars Electronica 1998. The boxes are joined together with metal springs, both horizontally and vertically. One oscillating motor is attached to each stack. These motors are driven by a computer that, by varying the speed at which the motors rotate, evokes interferences between the stimulated vibratory and resonant frequencies of the construction. Depending on the combination of selected motors and frequencies each box can be vibrated independently, while also one complete stack can be brought into one periodical movement. Also combinations of vibrations can be generated to occur simultaneously at different positions within the construction. 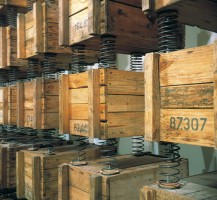 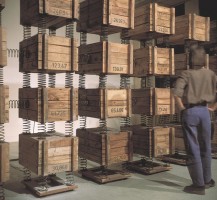 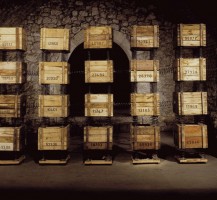 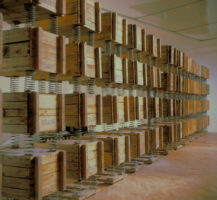 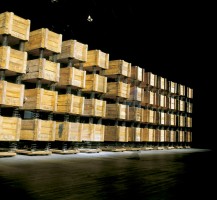 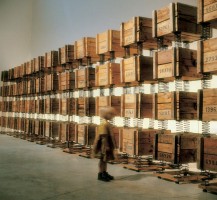 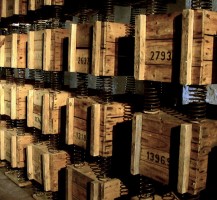 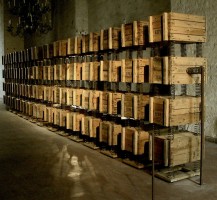 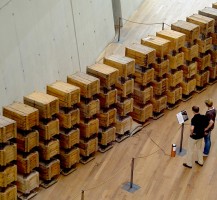 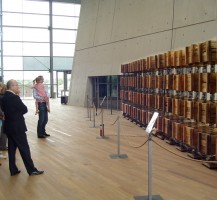 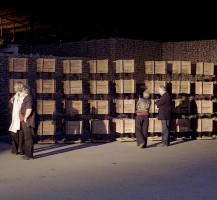 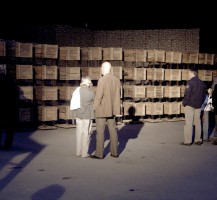 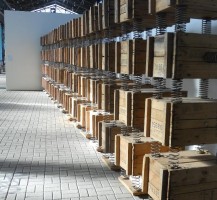 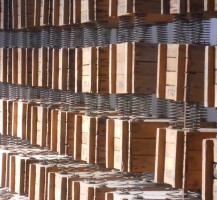 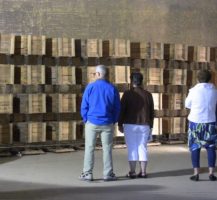 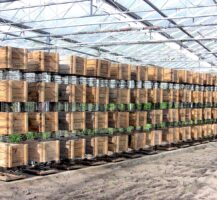 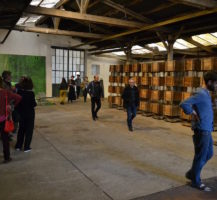 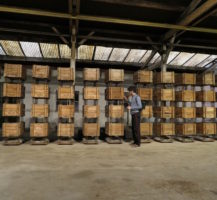 Each box contains different materials. These “rattles”, varying in volume, weight and sound, possess their own resonating characteristics. When stimulated by an oscillating motor the combined vibrations from all the elements – the springs, the boxes, the various rattles in the boxes, etc. – produce an extraordinarily complex whole. In spite of this complexity, the relationship between all the visual and auditive elements of the installation is unambiguous: What you see is what you hear. The sounds are pure, unamplified and rich in detail – in the tradition of our installation Was der Wind zum klingen bringt (1989-90). The repertoire of the Krachtgever can be best described as stacks of sound varying in strength, timbre and rhythm from the subtle to the powerful, from the ordered to the chaotic.

The Krachtgever at the Stedelijk Museum, Amsterdam, 1995.