The vibrations generated in the Trajectversterker (“Track Amplifier”) are able to transport objects over a distance on a track constructed out of a number of wooden elements. The vibrations are ‘one-way’ directed. The length of the track depends on its specific placement. In it’s first appearance, November ’93, at TARt’93, Rijksmuseum Twenthe, Enschede, the Netherlands, it was a single, straight track, 13 metres in length and raised at a slight angle. The objects were rough, unfinished Dutch clogs of various sizes. The wooden elements, in this case eight, are of a sandwich construction, in other words hollow-bottomed. A form of construction that is necessarily solid to ensure that the vibrations are carried over the total length. The hollow bottoms also serve as sound chambers for the moving vibrating objects. When placed on the track, the objects defy gravity and move up the small gradient toward a point somewhere in the distance. The role of the computer is restricted to switching on and off the vibratory magnets, each independently, or choosing different combinations of magnets. At first, the behaviour of the objects appears to be orderly, however, on further inspection not only do the vibrations themselves differ in intensity along the various parts of the track, but they also change strength on the spot. Even the changing position of one object can influence the behaviour of other objects moving on the same element. In fact the whole track is made to vibrate with such complexity that it is unpredictable whether or not a given object will reach its destination. Another case of apparent technical simplicity leading to complexity. The Trajectversterker offers subtle possibilities to move sound within a space, to let it travel (the form and acoustics of the space itself being crucial). Every object has its own musical identity and its own tempo according to its material, size, shape, form. The sound dynamics can vary from extremely powerful to the hardly audible.

We developed a second version, the Vooruitgang (“Progress”), at the end of 1994. Although based on the same basic principle, the construction of the Vooruitgang is completely different. Visually, the most striking difference between the two projects is the relatively transparent construction of the Vooruitgang, in comparison with the robust appearance of the Trajectversterker. More importantly, however, is the difference in construction and so too in the sound. The thirteen metre long, straight oblique Trajectversterker has a beginning and an end both structurally and auditively. Once on the track there is no return and sooner or later all the objects reach their destination. A particular piece of track is never travelled twice. The Vooruitgang, by contrast, is finiteness absolute. The track is self-contained in construction and the sound is without beginning or end. For the performance in the Palais Bondy in Lyon in March 1995, the installation was almost square, measuring 4 by 4.75 metres. The objects climbed with fits and starts, fell back, struggled on, fell back, climbed on and on along their never-ending “circular” track. The same journey is repeated again and again. Only the combinations of objects change, from group to group, coming together, moving apart, loners helping each other one minute, obstructing the next. The sound swells or diminishes in continuously changing tones, once heard never to return in this constant stream of change. The emphasis in the installation Vooruitgang is not placed on great energetic volumes and multi-layered tones, but rather on the intimate experience of a few moving bits of material. 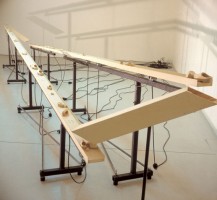 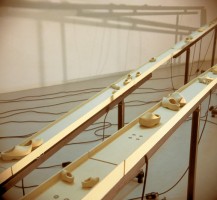 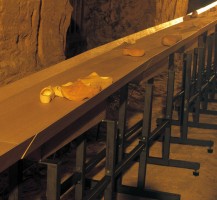 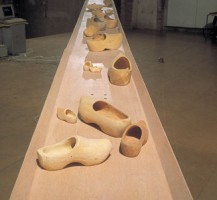 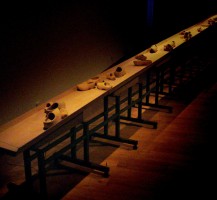 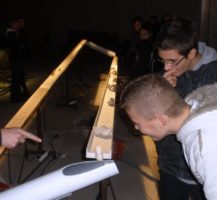 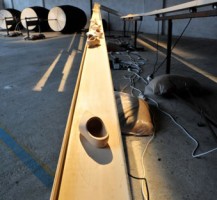 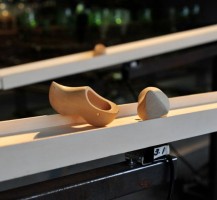