The Krachtgever was shown in Nagoya’s Modern Art Museum only a few months after the violent earthquake which occurred in Kobe in 1995. Although the Krachtgever had absolutely nothing to do with the earthquake, plans for the exhibition had been made over six months previously, for the Japanese public it certainly did. We have been working with the phenomenon of vibrations for many years now; with the power and the energy they can convey. The music our installations play are sometimes so rhythmic, sometimes so chaotic, sometimes so aggressive. And then we visited Kobe. The construction of A Castle for Kobe was simply a necessity. Something we could not not do. A small monument in the spirit of Japan. Not something heavy and monumental, meant for eternity, but something fleeting, portable, lightweight. The wall of vibrating, rough wooden transport crates the Krachtgever, extended further and further over the years 1994-98, is a leaden, dynamic sculpture, robust of sound and material, which exudes a sense of danger that is both audible and visual. A Castle for Kobe however is nothing more than what it is: Cardboard boxes and springs, oscillating motors, resonance and shake it away! The beauty of minimal movement and the energy of sound. The power of this installation is in its apparent simplicity. Apparent simplicity indeed because this is the most physically complex of all our installations. Even though, strictly speaking, the Krachtgever is three dimensional in form, because the boxes are stacked as one horizontal plane its behaviour can mostly be described using two-dimensional models. By contrast A Castle for Kobe is truly three-dimensional. It is constructed out of cardboard boxes and springs that can move freely in the width, in the depth and in the height. So far we made four different versions: Version I was exhibited at the International Computer Music Conference, Hong Kong, 1996, version II was shown at the University of Twente, Enschede, Netherlands (TARt’96). Version III was shown at the Utrechtse School, Utrecht, Netherlands,1997 and version IV at STOP LOOK LISTEN, Universidad Politécnica, Valencia, 1999. Version IV is the biggest consisting of around 70 boxes of two different sizes. Its dimensions are ( l x w x h ) 4x 4x 3.5 m. 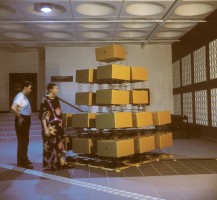 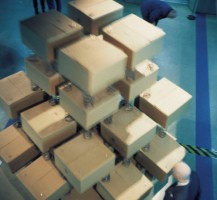 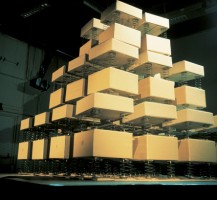