Último Esfuerzo Rural (“Last Rural Effort”) was premiered  in Valencia at the Ensems festival of contemporary music, in May 2004. It is composed of two rather different installations. Both produce sounds, big or little, always coarse, sensitive and individual. One part consists of maximum nine giant “zambombas” (lions roars), made of barrels, measuring 1m30 and played by pneumatic cylinders. The other part are hayforks which scratch on metal plates or glass. Both machines have such a peculiar sound world, that its origin cannot be other than the countryside. A feeling which comes out of the deepest inside, like the braying of a donkey. The hayforks make up a small machine with a long-range energy radiation while the barrels, on the contrary, compose a grotesque machine with a relatively small energy radiation (when not amplified). The minimum with the maximum performance, or the maximum with the minimal performance, the result is similar: In this paradox poetry is born. 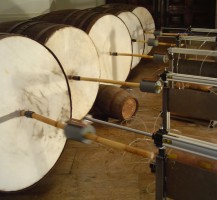 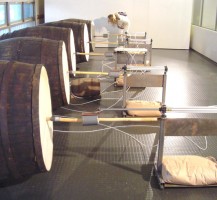 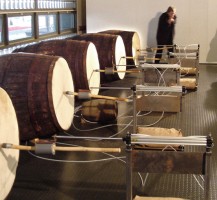 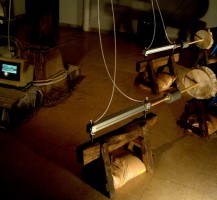 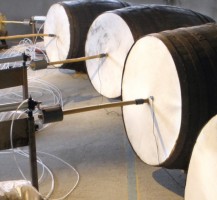 Technically both machines span and unite the rural, industrial and computerized eras. Mentally predominates the rural thought. The rural world is “self-thoughtful”: The individual himself looks for simple, but creative and playful solutions for the problems that happen in the world surrounding him (with sweat, strength and courage.) A state of mind which is disappearing in our globalised world. We do not want to romanticize rural life but the original thought and strength of the individual. We think this is how the creation of our work takes place. Último Esfuerzo Rural continues the vibratory tradition which characterizes a great number of our previous works. However, the origin, the lead and the director of the music it produces is another phenomenon related to vibration: friction. We think that the rural mind and that unpredictable, non-linear phenomenon of friction conform together a powerful combination. This almost natural couple gets together with our interest in creating living machines with a language of their own. The sound colour of the work is a mixture of very low frequencies, even inaudible ones, with atonal scratching. This effort with its peculiar sound and its mental and associative potential announces a new stage within the series of the vibratory machines.

At the MEM festival, Bilbao 2006 we introduced several new elements. We developed a new type of zambomba that acts in another frequency range as the giant barrels, bringing the work even more into life. While the big zambombas sound and tremble stronger than ever, being amplified individually, each with its own mike and bass combo, the new model produces surprisingly organic sounds, introducing a new, mysterious and playful flavour. The improvement of the hayforks was simple but maybe even more effective. Instead of using a specially built construction to scratch on, the forks scratched directly on the show-window of the gallery, transforming the work into public art to be enjoyed inside and outside of the space. The sound is much dryer and more direct than with metal plates and the transparent image is more efficient and stronger. Further enlargement of both components of Último Esfuerzo Rural will increase the impact of the work, shown together or separately.