In 1968 Steve Reich wrote the music piece Pendulum Music. Four or more microphones are suspended by their cables above a loudspeaker. Each amplifier is turned up just to the point where feedback occurs when a mike swings directly over its speaker. The performance begins with performers pulling each mike back like a swing and releasing them in unison. The piece ends shortly after all mikes have come to rest and are feeding back a continuous tone. Not everyone who has seen the Electric Swaying Orchestra would think at once of Pendulum Music. Nevertheless, these projects have a lot in common. In both projects, the musical outcome is determined by the change in distance between sound input and sound output devices; here, however, the performers of Pendulum Music are replaced by motors and the analogue feedback by digital feedback. In Reich’s piece, the small differences in periods and stop times of the periodical movements are unpredictable factors. In the Electric Swaying Orchestra this unpredictability is realized by parametrically-driven pendulums. Parametrically-driven pendulums is a well-known subject that has been thoroughly researched and documented by physicists within the cadre of order and chaos theories. As in the concept for earlier works unpredictable, labile equilibriums are central factors and lead to situations that are impossible to control entirely. In Bamboo-air (1986-87), the duration and slowly changing timbres of this thirty minute concert depend on the amount of air that is stored in gigantic balloons. In Was der Wind zum Klingen bringt (1989-90) the development in time is determined by a self-generating computer program based on the principle of “cellular automata”, a system associated with artificial life research. 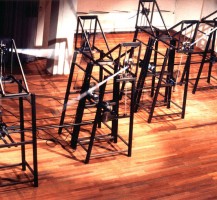 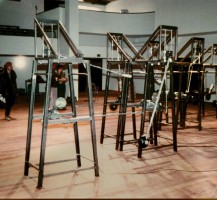 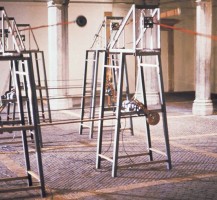 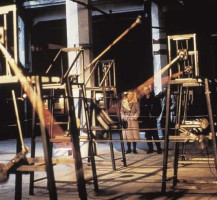 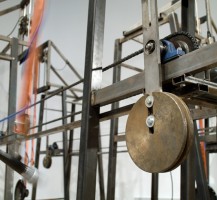 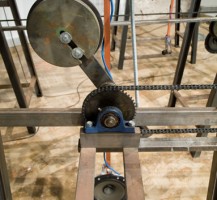 Historically, the pendulum was used to create order; in the Electric Swaying Orchestra it brings chaos. Six pendulums are activated by the up and down movement of their hanging mounts. Since the behaviour of the pendulums depends on the oscillating frequency of these mounts, a vari-speed electric motor is used. As a consequence, the pendulums command an exceptionally wide range of movement; what starts off as a traditional to and fro swing can become an unpredictable and irregular motion leading to a startlingly vigorous full circumrotation. A microphone or loudspeaker is attached to the end of each pendulum and electronic music (sampled brass instruments) is heard from the loudspeakers. The role of the computer controlling the electric motors and the musical process is paradoxical. Although it controls the system, it has no exact control over the consequences of its decisions. The computer interprets the sounds received from the three swaying microphones and responds by playing new notes over the three speakers. The determining factors for this live improvised music are the unpredictable movement of the pendulums and the listening and composition rules executed by the computer. The computer is constantly listening to itself in a repetitive process without end. The complexity and unpredictability of the system ensures that each performance is unique in both movement and sound.

This project was developed in cooperation with TARt´91, University of Twente, Enschede, Holland. Additional support in the form of a grant was made available by the Fonds voor Beeldende Kunsten, Vormgeving en Bouwkunst, Amsterdam. It was awarded a Honorary Mention in the section Interactive Art, at the Prix Ars Electronica 1992, Linz, Austria.