In this project we transform video images into sound. These images were created by Dr. Danyla Bobkov and his colleagues from the Institute of Cytology, located in St. Petersburg. In their scientific experiments they used laser scanning confocal microscopy to investigate the behaviour of live isolated rat hearts. The main focus of their research was on the arrhythmic behaviour of these hearts, how it arises and how it’s possible to avoid it. It was shown that some of the cells one by one start beating with frequencies different from the original rhythm due to chemical factors. The noise from these cells may grow, and finally affect the fundamental frequency causing an irregular heartbeat. It’s a well-known phenomenon that the reduction of a cell is related to the calcium level in it. Using a special dye that reacts with calcium, it is possible to observe the beating even of only one cell. 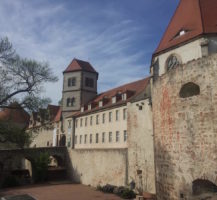 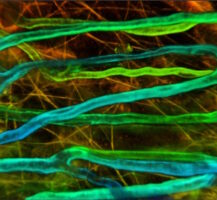 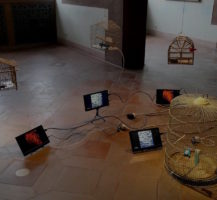 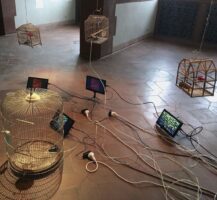 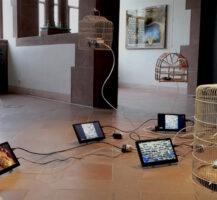 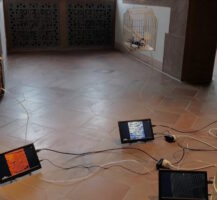 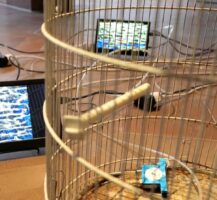 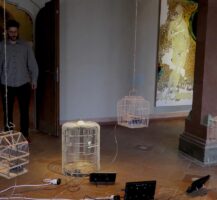 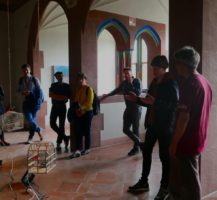 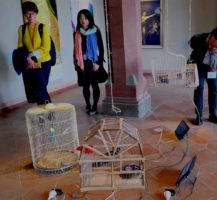 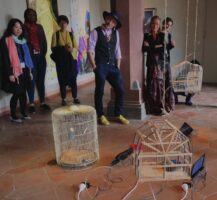 At the premiere, May 2019, in the Kunstmuseum Moritzburg, Halle, Germany, we had four video channels that controlled the behaviour of four vibrators. These vibrators, of a rather prosaic, industrial design, are placed in a vivid, poetical variety of cages, that originally house living animals; A normally lifeless, mechanical object becomes a kind of relic of what once was a living creature, like the isolated rat hearts in the laboratory setting, creating an audio-visual metaphor of a biomechanical machine.

We keep on collecting animal cages, thinking of bigger versions in the future. The small screens we used in Halle may be replaced by much bigger individual projections, depending of context and the properties of a space.

Special thanks to Danyla Bobkov for providing the scientific video footage, to ArtSci Nexus for bringing us together and to the Global Young Academy who made this first version possible by producing the exhibition “Finding Affinities” as part of the 10th annual meeting in Halle.

More about the exhibition at: