Sound recordings: (play/pause at the left part of the bars)

The 1st track is a recording from the centre of the space when working as an autonomous installation, the 2nd is an excerpt of a recording made by Johannes S. Sistermanns of the live improvisation. 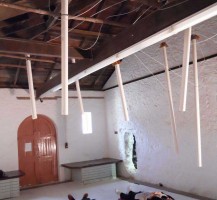