After Bamboo-air (1986-87, in cooperation with Hans van Koolwijk ) Was der Wind zum Klingen bringt is our second installation in which air-pressure is transformed into sound. Its first appearance was at the exhibition “A-lärm” at the Oosterpoort, Groningen, Netherlands, June 1989:Twenty-four vacuum cleaners arranged in a circle provide air. This air is blown through rubber appendages into PVC pipes, producing voluminous, almost animal-like sounds.The installation in its second form, which had its premiere in the Stedelijk Museum, Amsterdam, 1990, within the framework of “Energieën”, had been altered in many aspects.

The number of sound sources had been doubled to forty-eight, and we developed two new sound production systems for the additional twenty-four, creating four different sound groups: 16 open PVC-pipes, 16 metal pipes, 8 closed PVC-pipes and 8 freely vibrating rubbers, each group with its own sound characteristics. The assembly of the installation is flexible and can be adapted to the site. The arrangement is controlled by a computer which switches the vacuums on and off according to a score which is displayed on a monitor. This self-generating score is based on the principle of ‘cellular automata’, developed in the early fifties by von Neumann and Ulam in the United States. The compositions generated by the computer gained in complexity due to the use of different procedures for different groups of pipes. In addition to the concept of an auto-composing self-supporting installation, we developed a fixed score with a duration of twenty-four minutes, making finite concerts possible. An apparently unpredictable sequence of timbres, harmonies and dynamics are combined to create the illusion of a living object. 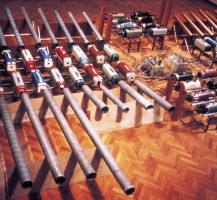 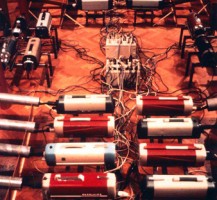 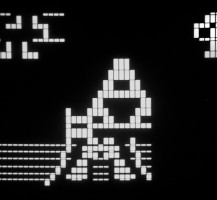 screenshot from score for Was der Wind zum Klingen bringt, 1990 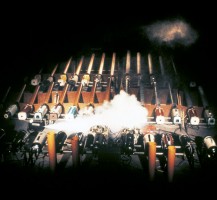 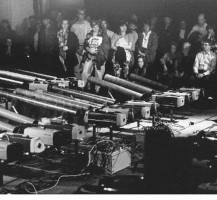 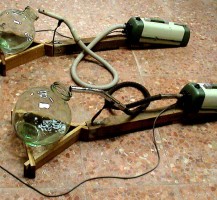 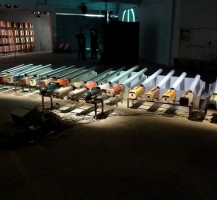 Special thanks to Joel Ryan for some software implementations and to Lex de Groot for the development of a relay interface.

In 2003 we developed another installation titled Was der Wind zum Klingen bringt 3.01, belonging to the collection of the Museu d´Art Modern, Tarragona.